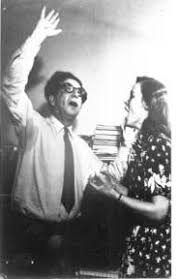 [Note: This is a continuation of “What is Voicement Movement Therapy?” Please read Parts 1 and 2 first.]

The purpose and principles of VMT

Combining Wolfsohn’s therapeutic voicework with: the theater work of Hart, Grotowski, and others; the work of Reich in body-centered psychotherapy; of Jung through the process of active imagination and the concepts of archetypes, animus and anima, and process of active imagination; and of Moses in creating categories of auditorily recognizable constituents of vocal sound with which to view both physical and psychological conditions, Newham formed a multi-modal Expressive Therapy of the Voice which seeks to increase the flexibility, durability and versatility of each individual voice through:
1. An investigation of its organic and developmental relationship to breathing and bodily movement;
2. an exploration of how the components of the voice and related movement patterns reflect different aspects of ourselves and our life stories and can be used to effect change and growth.

The core of the VMT “system” is based on the metaphor of the continuous and flexible vocal tube and the identification of ten vocal components common to all voices.
Although I personally mistrust the words “method” and ‘system” – ever mindful of how they can become too rigidly adhered to and cut off new avenues of individual creativity in the process – Newham synthesized much of the foregoing work to create what I believe is the first true psychotherapy in which the voice is the main modality. It has neutral, objective terms for discussing qualities of voice across a broad spectrum and is based not only on creative and therapeutic process, but also upon a knowledge of acoustics and the anatomy and physiology of the vocal system in relation to the rest of the body. It is eminently teachable and transferable to others.

Newham resigned from the work of VMT in January 2000, and its professional organization, the International Association for Voice Movement Therapy (IAVMT) re-incorporated itself at that time. We are continuing his work and have expanded the training by making it more specifically developmental and emphasizing the importance of group process in the creation and maintenance of a safe therapeutic container. We use the work for art and therapy, seeking to make our voices and ourselves increasingly responsive to processes of change and growth.

For us, as for Newham and Alfred Wolfsohn before him, VMT work begins, NOT with the spoken word, its cognitive content or articulation, but with the affective aspects of voiced sound and combines a basic knowledge of vocal acoustics and the anatomy and physiology of the vocal system — as influenced by events in the body — with movement and massage, imagery and enactment, creative and therapeutic process. It is, in essence, an exploration of the self and one’s ability to communicate, verbally and non-verbally, through the voice. It is useful for individuals whose vocal expression is blocked, limited or otherwise difficult as a result of emotional or psychological distress, muscular tension and/or neurological or physical impediments, as well for as those who seek further personal or professional empowerment through the voice

I would like to note here that work with different populations in quite a few different countries and continents is currently being done by VMT practitioners: in social work agencies, hospitals and clinics; in schools of various kinds; and in private practice; with people suffering from PTSD, AIDS and abuse; with children and adults experiencing developmental delays; with people engaged in becoming singers, actors and ministers… in short, in many different kinds of situations in which the issue of voice is of paramount importance to the individual in question.
Conclusion

In closing, I would like to summarize by saying that the human voice reflects both physical and psychic states and has the ability to convey cognitive meaning and affective expression simultaneously. It is our primary instrument of communication for both ideas and feelings and can move us with words and beyond words. It is the only instrument wherein player and played upon are contained within the same organic form and therefore can achieve its fullest expression when firmly grounded in the body. It has two main channels of communication: the words we say – the symbols we use to convey our cognitive message; and the way we say them – the tones and qualities of voice which express the affective or feeling message underlying what we speak or sing.

The heart of VMT is, I believe, the achievement of the embodied voice and its container is the song. The voice is the medium; movement grounds it in the body; and it is pursued within the crucible of a consistent therapeutic relationship.

The development of language, both in terms of the evolution of the human species and in the progression of individuals from infancy to adulthood, originated in vocal gestures without words and then became joined to acoustic and written symbols. This has often led to a de-emphasis on the emotions behind the words, an essential ingredient which we seek to recapture through the act, and art, of song – a process by which the song becomes the vehicle for both the expression and the containment of issues and affects, thoughts and emotions. To the fullest extent possible, VMT practitioners believe it is necessary to re-embody the voice, not just from the diaphragm up, but through a holistic engagement of body, mind and soul. The more we can connect our vocal output to our physical selves – the more flexible, durable, versatile and responsive we can make it to life as we experience it – the more we can ground ourselves in the reality of our whole being. Working with a particular set of vocal components, breathing and massage techniques, images, ideas and the sounds and characters that emerge when engaging with one’s own story through the embodied voice, we seek to bring that voice into the world.

This blog is written by the practitioners of the IAVMT. View all posts by IAVMT Practitioner